← A Passion for Tea: Meet Multi-Talented Roz Weitzman
TORAH STITCH BY STITCH: Inspiring on so many levels, part 2 →

Torah Stitch By Stitch: Inspiring on so many levels

My friend invited me to a synagogue to see some wonderful needlepoint and to a listen to a presentation by her sister-in-law. I was immediately drawn to photograph the huge project hanging on the walls of the huge room in the synagogue.

Being an avid crafter all of my life, embroiderer, crocheter, knitter, sewer, quilter, scrapbooker, miniaturist, sketcher, painter and artist, it would come as no surprise that I was mesmerized by the project that was before my eyes.

Having never participated in Shabbat services (even when living two short blocks from a synagogue for several years) I do not consider myself to be religious in any way. But if a Jewish holiday is coming up, I always prepare a lesson and a craft or cooking activity in class about that holiday. I do possess knowledge of the religious and historical significance of most of the holidays and avidly cook traditional food that I serve during them. To me, it’s all about bringing family together to celebrate Jewish tradition, but not in the pure religious manner.

One spin off is being a part of something much bigger than just doing some cross-stitch. Imagine I’m part of a worldly group of thousands and cross-stitching the Torah in Hebrew, including: an agnostic Jewish woman, a Mormon fire chief, a Muslim immigrant from Turkey and a Mother Superior at a church in the English countryside to mention just a few.

During the presentation, I was enlightened to the Torah containing 5 books, being: Genesis, Exodus, Leviticus, Numbers and Deuteronomy. What I had seen on the walls was only the first book. They needed more than 300 more volunteers. I was in! 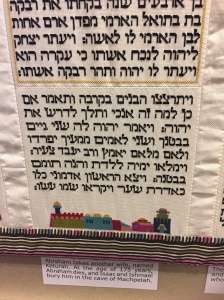 Signing up to cross-stitch a portion really did surprise me though, but looking back, I thought it was inspiring, a way to go back to my Jewish roots, participate in a huge project and do my share, along with create something so meaningful and do some handwork, something that I hadn’t done for many years.

I was so eager to get into the work and dug right in. I thought it was good enough to baste the borders on the cloth! Then stitch, rip out, stitch, rip out for the first row and part of the second. Humm! So much ripping out and I was going to run out of thread. I hadn’t carefully read the instructions, helpful hints or tips and at first I thought I had failed. Well, failure is not a word in my vocabulary. So I decided that I’d better be a ‘good student’, I went to do my research. 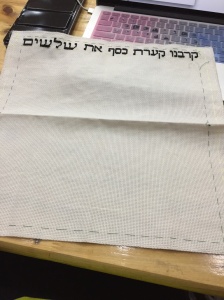 After the first week of stitching and I have finished 2 complete rows (5.5 more rows to go)…and I think it looks pretty good! 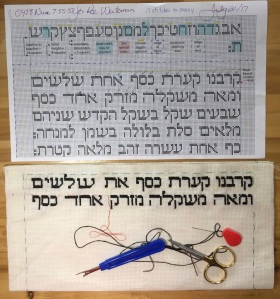 2 lines finished in the first week!

My portion is Numbers 7:55-7:58. It is part of the story of an outsider from another country who has an affair with the wife of the Israelite leader at the time. This causes a war between the countries. The Israelites win and the punishment is that the outsider must pay retribution in the form of one silver charger of the weight of an hundred and thirty [shekels], one  silver bowl of seventy shekels, after the shekel of the sanctuary; both of them full of fine flour mingled with oil for a meat offering, one golden spoon of ten [shekels], full of incense, one young bullock, one ram, one lamb of the first year, for a burnt offering and one kid of the goats for a sin offering. My portion is short and leaves a large portion at the bottom of the aida cloth which is big enough for an illumination (illustration) for embroidering. Being in China while doing this stitching, I am thinking that I may embroider a yuanbao, which is ‘boat-like’ type of silver or gold ingot currency used in imperial China. Since the illuminations are limited to 5 colour choices and grey or silver isn’t one of them, I’d have to get creative!

If I don’t finish in 6 months I won’t kill myself, but I certainly will think about it…haha@!

For more information on how to sign up to stitch, or to visit the exhibit at Darchei Noam in Toronto, visit torahstitchbystitch.org (mention my name and they’ll mail you a kit).

Interesting reading about this delightful project at http://nationalpost.com/news/religion/the-stitched-torah-toronto-tapestry-project-inspires-volunteers-from-around-the-world/wcm/53889c37-86c3-40d2-91e6-1e4ae6062e83

Periodically in China since 2005 to research my cookbooks and travel in China and southeast Asia. Loving the experience. Want to keep in touch with my friends and family all over the world! I published my Chinese Cookbook called 'Roz Weitzman's World of Chinese Comfort Food'. This week I published my latest in my series of Chinese cooking called "Roz Weitzman's World of Yunnan Food". Please won't you scribble a thought or two. I really appreciate your comments! AND IF YOU SHOULD WISH TO REPOST MY RECIPES OR OTHER OF MY POSTS ON YOUR OWN BLOG, BE SO KIND AS TO POST A LINK BACK TO MY BLOG AND GIVE ME CREDIT FOR MY ORIGINAL WORK. MANY THANKS IN ADVANCE.
View all posts by Roz Weitzman's World »

← A Passion for Tea: Meet Multi-Talented Roz Weitzman
TORAH STITCH BY STITCH: Inspiring on so many levels, part 2 →